On October 24th 2017, Tantalus Labs submitted the following document to the Provincial Cannabis Secretariat. We are proud that our Provincial Government has taken the time to receive submissions and hear from voters and taxpayers. We believe our legislators have been presented with the information that they need to build policy reflective of our province’s culture and aspirations, thanks to contributions from all stakeholders.

We believe that the inclusion of regulated but independent ecommerce platforms for producers and retailers is a critical lynchpin to the success of public health and safety outcomes, industry growth, and facilitation of producers of all sizes. This initiative also limits public expenditures at the contentious outset of legalization that come out of the taxpayer’s pocket. Provinces such as Ontario and New Brunswick have decided to operate provincial distribution intermediaries. Alberta recently calculated that implementing such a system in their province would cost $168mil.

Such an intermediary does not enhance user experience, reporting compliance, or supply chain security. It could be argued that it would, in fact, create another expensive layer of lossy reconciliation. This will add cost to our offerings, which we want to deliver with the most value possible. We believe that through software reporting across the supply chain, we can emulate the public health and safety successes of Washington State without the need for a government operated clearing house.

Whether we distribute to Government liquor stores, private liquor stores, or independent licensed retailers, LP licensed premises are equipped for secure, consistent, and transparently reported inventory management today. We are also equipped to deliver directly to British Columbians who live in municipalities that may ban retailers in their towns and cities. This reduces Government CAPEX, speeds implementation, and allows British Columbian Licensed Producers to interact directly with end users.

British Columbia is a province that celebrates technology and entrepreneurship. Our innovation leaders have become global examples of government control harmonizing with facilitation. Inhibiting producer’s ability to speak directly to their end user without a demonstrable public health and safety outcome would be irresponsible and anticompetitive.

Tantalus Labs is proud to speak up on issues that we believe we can help our Provincial Government anticipate and understand. We hope you take this opportunity as well, if you have not already, and contribute your voice here:

Engage BC Cannabis Regulation at:
www.engage.gov.bc.ca/BCcannabisregulation/ 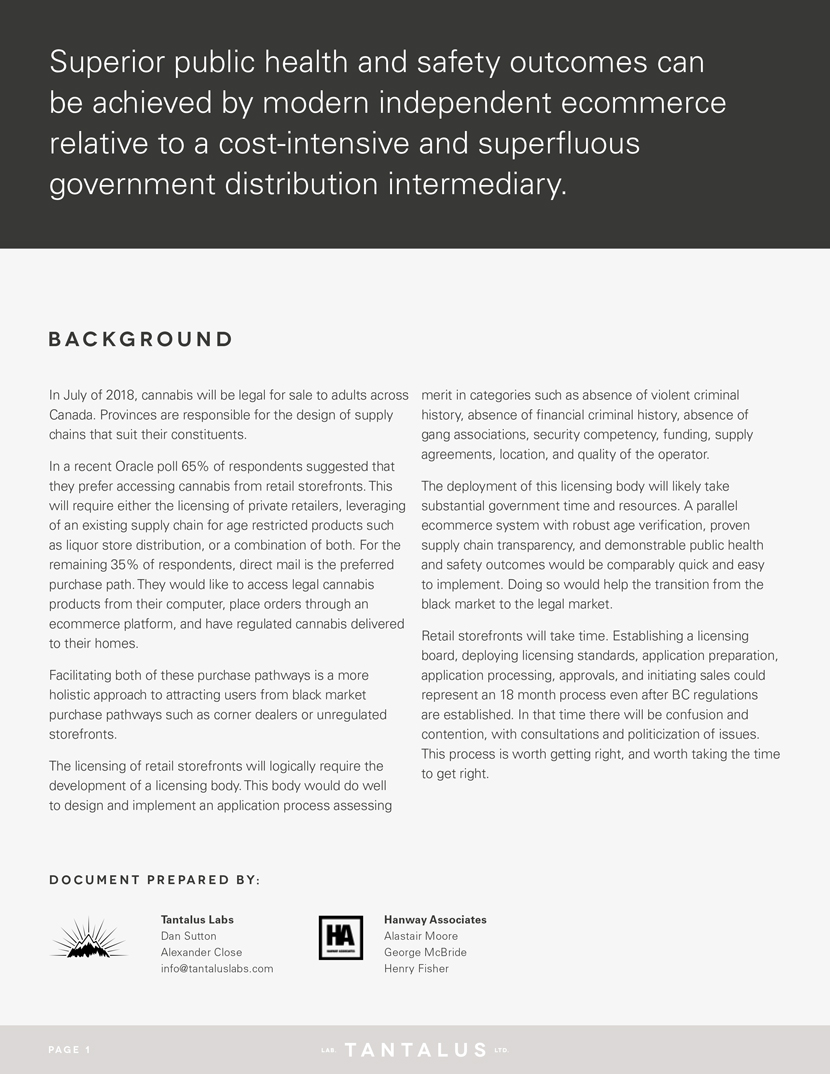 Shakespeare was right when he wrote ‘That which we call a rose. By any other word would smell as sweet’... and it’s all thanks to terpenes. Terpenes are the basic chemical components

SunLab Nano. A brighter future for home growers, too.